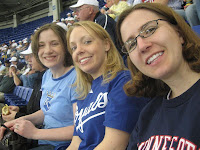 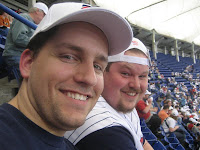 We enjoyed having house guests, and sharing the extra space in our house. Saturday we slept in and took it easy, and grabbed some lunch at Applebees. We had originally bought 5 tickets for Saturday night's game, but Jenny's husband didn't make it up to Minneapolis, so we invited Vinney to join us. Vinney and I left early and found some dinner at a cool little bar called Mortimer's where we savored some good cheap bar food. $2 special on cheeseburgers, some fries, and a cool Honeyweiss. The game was neck and neck for awhile as the Royals pretty much matched us run for run. Unfortunately this dragged out to a tie after 9 innings. Two innings later the Royals came back with 3 more runs to win the game. But at least we had good friends to hang out with... even if some of them were cheering for the wrong team :-)
Posted by Unknown at 9:05 PM