2009 Pumpkin Carving at the Workbench

This Halloween I decided to tackle pumpkin carving with some serious tools. None of the flimsy plastic tools for me this year. Tools I was familiar with, that could easily handle a little pumpkin flesh. While these are not necessarily child-safe, it was much easier for me to be creative this year with tools from the workbench.

I had more ambitious plans since we had three pumpkins to start with, but a few cold nights froze two of them, so they were no good for carving. But we still had one!

After a light pencil sketch on the pumpkin, the carving began with a utility knife. I set the blade to a shallow cutting depth, and cut an outline of the shapes to be shaved down. This was enough to pierce the skin to make room for the next tool, the chisel: 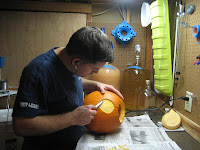 With the eyes & mouth chiseled down smooth, next came the spade bits for two uniform pupils in the eyes: 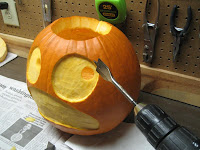 To tackle the detail on the teeth I used a mini hack saw, designed so the blade protrudes outward. This makes it easy to stab, and the serrated edge cuts much better than an ordinary kitchen knife. The narrow but flexible blade also works well turning corners as you cut. It almost seems safer than a long sharp blade to me. This made it easy to cut out the gaps between teeth, as well as cutouts in the eyes: 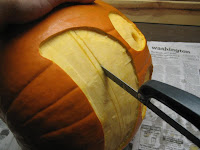 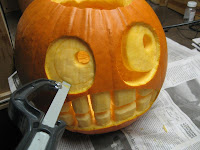 Finishing touches to the teeth were added with the utility knife. A sharp blade made for easy shaving & smoothing of the corners of the teeth: 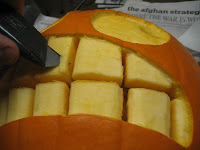 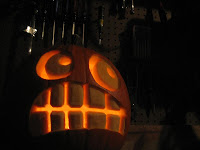 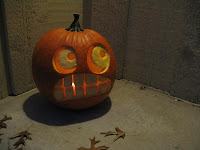