When I sit down on the computer and catch up on things online, I have my usual stops... Yahoo email, blog subscriptions through my Google Reader, and usually after that I check Reddit.com. The socially-driven site has helped me waste a lot of time and have some fun reading funny, interesting, and just random stuff online. Users submit links to other web pages they find worthy of sharing, and the Reddit community votes them up or down. Links with more votes get pushed to the front page of the website, while the less popular get voted down into obscurity. For those not familiar, this is not a new concept online. Reddit just happens to be one of those sites that I enjoy. The users there seem to be my kind of demographic, and the submissions and discussions are fun, even if I don't always agree with everything there.

Back in November, some of the users on Reddit suggested the idea of putting together a big Secret Santa with other members. When the suggestion was put out there the community responded with a big "yes!" and the project began. A website was put together (RedditGifts.com) along with a basic set of rules. This was going to be fun.

I finally signed up on the last day of signups. In all, 4,391 people from 54 countries signed up for what appears to be the biggest Secret Santa ever. The gift-giving statistics are staggering. Users who signed up had the opportunity to share a little about themselves and what they may want (or not want) from their secret santa. The Santas also knew their Santee's username on Reddit, and could browse their comments and postings to learn more about their recipient. Some people engaged in a little more research online to learn more about their assigned giftee to figure out the perfect gift. Since the gifts started shipping, the project has been getting attention from all around, including ABC News and the Washington Post. The folks at Reddit even offered to host RedditGifts.com on their servers because the site was getting so much traffic.

This has been a really fun project to be a part of. It's been interesting to see what people have gotten from their Secret Santas, as the website has a gallery where people can upload photos of their gifts and other members can discuss them. There have been some bad gifts, some extravagant ones, but overall people have come up with some unique and creative gifts within the suggested $15 limit. We've all enjoyed watching so much Christmas giving as new gifts appear on the site daily. 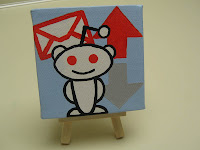 I was assigned a guy from Arkansas, and had an interesting (but not uncommon) challenge. He didn't tell me anything about himself, and he had not posted anything on reddit that I could go back and read. In addition, I couldn't dig up anything online. So I decided to give something creative, and something useful. For the creative gift, I broke out my painting supplies and painted a small 4" x 4" canvas painting of the Reddit alien logo, and a couple other Reddit things: the new message envelope and the voting arrows. For the useful gift, I gave a 22-piece precision ratcheting screwdriver set. After wrapping my items, I packed up the box and sent it on it's way. Thus far, I know it's been delivered based on package tracking, but he hasn't posted anything on the site to let me know if he opened it or liked it. We'll see.

I had been so engaged in putting together a gift of my own, I almost forgot I might be getting a gift myself. My Secret Santa turned out to be a girl from Washington. I told her about myself, and she made a "secret santa" account on Facebook to become my friend for a few days and learn more about me. As a result, she decided to give a little Christmas cheer to my whole family. A small package arrived one day, decorated with the Reddit alien and some other artwork. An early Christmas present, yay! Upon opening it, I found a letter and three packages with nametags made out to me, my wife & son.

The whole thing was wrapped nicely with the signature Reddit orange-red envelopes as tags, and came with a nice letter wishing us a merry Christmas and it included a short message (Hello World) to my son written in PHP code. 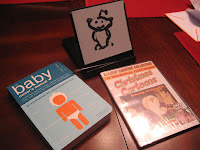 For me, "The Baby Owner's Manual: Operating Instructions, Trouble-Shooting Tips, and Advice on First-Year Maintenance." It's full of good info, but better yet it's written with a fun technical sense of humor and lots of "schematic" type drawings of all things baby. Fitting since I work in tech support and have an innate desire to diagnose & fix things. I was seriously laughing out loud flipping through this book.

For my son was a DVD of some old Christmas cartoons.

For my wife was a Buddha Board. It's meant to encourage mental relaxation/zen. You get the paintbrush wet, and the surface turns almost black with a little water from the brush, and it evaporates and disappears quickly. Very unique, and could be fun for our son and nieces & nephews as a simple, clean way to play with "painting". It was adorned with some Reddit Secret Santa alien labels.

This was fun, thank you Santa! And thank you to the dedicated people who helped put this all together. Nathan likes his new book: 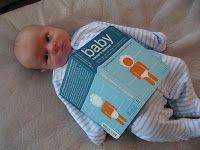