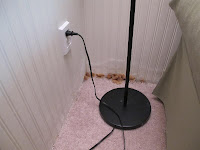 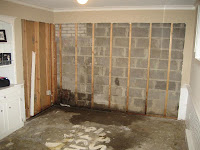 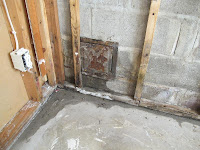 At this point we've decided to go ahead and fix up the gutters and the water damaged soffits & fascia like we've talked about doing since we moved in. We're also going to fix up the landscaping so water is directed away from the house better. I haven't decided if I want to dig in front of the chimney to look at the foundation, but if we direct water away from it, a foundation crack wouldn't be so much of an issue anyway. The chimney itself has some deteriorating brick above the roofline, but that repair/expense may have to wait, and at least we know it's not the source of our water problem.
Posted by Unknown at 12:18 PM