I thought I should take a moment to show off the latest cake creations of 2011 from Dad's cake shop. Partially because I'm proud of how they turned out, but also to show how simple they really were, and maybe help somebody else do the same.

The first project was a basic cross-shaped cake for our youngest son's baptism. This was made from a basic 9x13 cake. The shape of the 9x13 pan lends itself well to this design. As shown in the pictures below, you can cut out the corners of the cake and they stack up to make a second layer of the cross. Essentially you make the cuts as if the cake were divided up into a 3 by 4 grid. 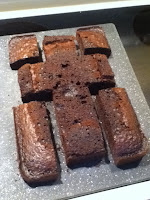 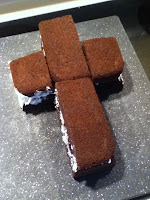 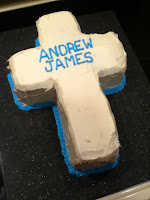 One thing I learned with this cake was the trouble of putting white frosting on a chocolate cake. Even though I froze the cake, I still had a large number of crumbs come off in the frosting process. I ended up having to chill and re-frost another layer to get a nice white exterior. This was also due to the fact that I used a cream cheese frosting, which is pretty thick. While tasty, the extra frosting was almost too thick for my taste. Overall the cake still got good reviews.

Our older son loves Curious George, so when his 2nd birthday came around it was easy to pick a theme... Curious George! The cake design was inspired by ones I had seen through some Google image searches. The cake is made up of 2 round cakes stacked, and the ears were made by baking some cake batter in a muffin pan. The muffin was cut in half to produce each ear. 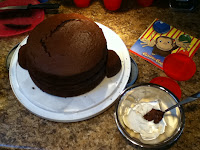 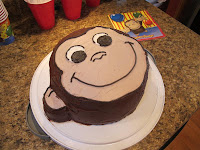 Frosting was done with some basic jar-frosting, using chocolate for the darker brown, and a mix of chocolate and white frosting for the lighter brown. The eyes were frosted with white frosting as well. I happened to have some black coloring, which I added to the chocolate frosting for piping the dark lines. Overall I was pleasantly surprised with how easily this one came together, and how good it turned out. Best of all, our son liked his Curious George cake, and our guests ate it up!
Posted by Unknown at 8:03 PM