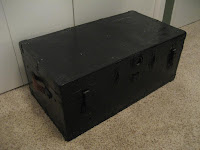 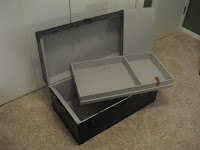 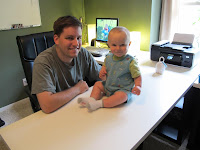 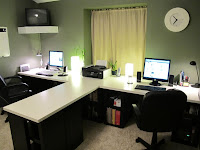 Now the downstairs (former office) room is our next project. Beth has moved out of the room, and now we just need to sell off her old desk and get rid of some more items. Once it's cleared out we can look for a deal on a low-cost new/refurbished/used treadmill and set up a little exercise space. The cool temperature downstairs should lend itself well to working up a sweat. Having the ability to exercise my heart and body year-round at home will be great. I'll be able to keep up a relatively consistent habit, and be more available as a husband and father. I want to keep my heart healthy and I don't want to become the person who has a treadmill that never gets used. Granted I have more of a reason than most to use it. At least for now I'm able to get my exercise walking outside, and assembling and moving furniture!
Posted by Unknown at 10:51 PM 2 comments:

The family enjoyed a fun Fourth of July this year on Mom & Dad's boat. The day started out rainy and windy as we made the 90 minute drive down to Red Wing, but the weather slowly turned around as we floated in the marina eating our lunch below deck.

Nathan enjoyed his first boat ride, much of which was spent sleeping thanks to the dark bedroom and slow rocking of the waves. He slept almost 2 hours for his afternoon nap. Once awake, Grandpa let him help steer the boat. He had a blast! 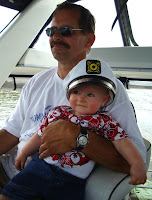 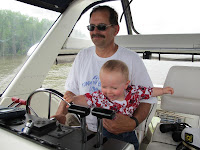 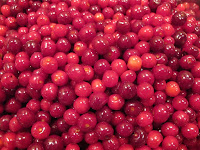 After we returned to the marina mid-afternoon, Dad and I went out to pick some cherries from some trees on public land not far from there. Dad had been there already to pick some for making wine and had also started picking some for me. By the time we got there, most had been picked already, but we were able to scrounge up maybe another pound, giving me about 10 lbs total, enough for at least 3 gallons (15 bottles) of wine.

We headed home at Nathan's bedtime so he could sleep on the car ride. This happened to be his last ride in the car seat since he's big enough now for the upright car seats. After putting Nathan to bed we enjoyed a relaxed evening, and I stayed up late to start processing my cherries for wine. The new batch is now fermenting away in the basement. Can't wait to try it!
Posted by Unknown at 1:07 PM 1 comment: